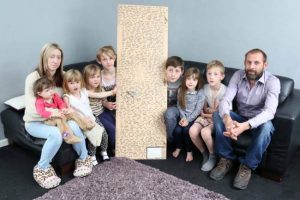 PIC FROM CATERS NEWS – (PICTURED: Mum Caroline, Naysa 1, Letissia-Dior 2, Indika-Mayah 4, Porscha, Ethan 11, Tiana 5,Harley 8 and dad Dean with the message on the back of the mirror) -A 12-year-old girl who died following a battle with cancer left a heart-wrenching secret message hidden on the back of her mirror. Athena Orchard, died last Wednesday (May 28) after losing her fight with the terminal disease. Just days after her death, Athenas dad Dean was stunned to discover a giant heartfelt note written in marker pen on the back of his daughters mirror. The message was written after Athena was diagnosed with cancer – which she discovered after finding a tiny lump on her head in December last year. Before she died, she penned the lengthy message which remained undiscovered until days after her death. SEE CATERS COPY.